Seeing Yourself in the World Around You

When it comes to TV shows, movies, and books, I see myself fairly regularly in the physical sense: I’m a young white woman. But when it comes to the things that I most associate with myself – being Autistic and struggling with my mental health – there is very little. Depictions of neurodiversity and mental illness are usually very stereotypical and often downright wrong. And that only adds to the stigma around mental health.

Now, I’m a twenty five year old woman with ASD and several mental health problems (including anxiety, depression, and BPD). I recognise that my experience is very specific. I’m not asking for a fictional version of myself; I just want some characters that I can really relate to. That isn’t an unreasonable request, is it? Seeing yourself in the world around you is so important, at least it is in my experience. It validates my emotions, my experiences, and makes me feel less alone when those things often make me feel very isolated and, if I’m completely honest, broken.

I’ll give you an example:

In Season 2 of Supergirl, the character Alex Danvers comes out as gay and a major part of the season is dedicated to her coming to terms with that and her relationship with another character, Maggie. This storyline meant a lot to a lot of people but the thing that I really connected to was Alex’s emotional journey and her relationship with being happy. In episode 9, her sister is abducted (said sister is Supergirl so she gets into trouble a lot but that’s beside the point) and her reaction is: “I was happy for five minutes,” revealing a belief that she doesn’t deserve to be happy, that somehow she is being punished for trying to be happy. This is brought up again later when she says, “I feel like the universe is just magically smacking me down from being happy.” These two moments were huge to me. This is something that I really, really struggle with and I have never seen it anywhere but inside my head. So to hear it from a character I admired meant everything to me. It made me feel less alone and less ridiculous for feeling this way. Because if this woman (who is more or less a superhero) feels like that, then it’s not unreasonable for me to feel that way, is it? Of course, I’d love for it to be revisited because it’s not something that goes away overnight but the fact that it was mentioned at all kept me going for days – weeks – and even a couple of years later, I can watch that episode and feel better.

And recently, Chyler Leigh – who plays Alex Danvers – has revealed that she lives with Bipolar Disorder. She first started experiencing symptoms at twelve years old and struggled through her teens and most of her twenties: “The mania would come and go, but the depression felt like it was always there. There are a lot of different ways mania manifests: I had extreme irritability and felt like an engine running on overtime; I couldn’t sleep at all; and I felt disconnected from reality, almost like I was high. As a teen, I did a lot of drugs, and that made me feel better, but crashing was devastating.” She tried to be the one in control of everything when she felt so out of control. She was diagnosed in her late twenties* but before her diagnosis, she says she felt like she was drowning and saw multiple medical professionals and multiple medications that just made her feel nothing: “[They] made me feel nothing, and that to me was more important than feeling happy or feeling sad. I withdrew and I shut down… I just didn’t know how else to function. And so I lied about a lot, I hid a lot. I kept to myself. And that caused an incredible amount of chaos and just destruction in the family.” Eventually she hit an awful breaking point, a mania so high that she couldn’t sleep at all and ended up hospitalised. Once she was released, she talks about how she needed to start fresh and find what worked for her. It was “very, very difficult” but now she’s in a good place: “I did find a medication that works that I still take, which keeps me very level, much more even. There are not really big peaks and valleys. It makes me function as a human being where I feel like, ‘Okay, I can manage when things are really hard and I can also really celebrate victories.'”

Like many of you, I’ve struggled. I’ve also kept quiet about it. I felt like my story didn’t deserve to be shared. But I’m ready to speak up about living with bipolar disorder – for myself, for my family, and for the millions of people who are experiencing something similar. I’m also very excited to announce that I am partnering with @bevocal.speakup, an initiative that encourages people to speak up for #mentalhealth – for themselves and their communities. Partnering with Be Vocal is my way of saying my voice matters. YOUR voice matters. Let’s do this together. Visit @bevocal.speakup to learn more about my story. #MentalHealthMatters #BeVocalSpeakUp #sponsored

Ten years later, she’s ready to talk about it and use her platform to support others and raise awareness: “It’s something that’s terrified me for a long time because it feels like I’m admitting some sort of secret, or some sort of way that people are going to look at me differently or judge me but I’ve been met with nothing but acceptance and love and support, which is just amazing.” Her story is complicated but unfortunately very common and she and her husband are raising three children who either have mental health problems or are neurodiverse. The link to the initial interview (I believe) is here in case you want to read more about it. She also talks about talking about mental health and mental illness with her children in a healthy way that isn’t scary and that’s really incredible. She’s now teamed up with the Be Vocal: Speak Up for Mental Health movement to advocate for mental health awareness and acceptance: “We have an incredible opportunity to change the narrative and change the conversation, and lead people to places that can encourage them and really take them where they need to go… It’s OK to not be OK. And it’s incredibly important to reach out. Be willing to let your guard down a little bit to be able to find that community. And also know that if you’re really struggling that there are so many resources.”

#ValentinesDay gives a chance to reflect on and honor our relationships, romantic or otherwise. I want to use today to specifically talk about how my #mentalhealth has connected to my relationship with my husband and family. Through it all – the highs, the lows, the inbetweens – my husband has been my rock. In my lowest of lows, he and my children have been incredibly open and supportive, lifting me up and encouraging me when I needed it the most. That is what got me through. For those who are going through it: surround yourself with people you can trust and reach out to them. Talk about it. If you don't feel you have people you can open up to, there are many organizations who want to hear from you and help you. You can go to @bevocal.speakup for more information on how to reach out and speak up. #BeVocalSpeakUp #MentalHealthMatters #Sponsored

*”When I first got the bipolar diagnosis it was sort of like, ‘Oh my gosh, if that was me, how on earth am I going to deal with this? Am I in the same place? Am I equipped? Do I have what it takes to actually really genuinely take care of myself?'” I find this quote really helpful because that’s how I feel everyday. I wonder EVERYDAY if I’m ever going to be equipped to look after myself.

And here’s another example:

One of my favourite fictional characters is Daisy Johnson from Agents of Shield (which will be ending soon, something I am genuinely devastated over – it’s going to take actual therapy time to adjust to such a meaningful change in my life). Again, she’s practically a superhero (there’s a theme, I know) and ever since I started watching the show, I’ve been very inspired by her and her storyline. She’s a force of nature. She’s experienced great tragedy and each time, she uses it to reinvent herself, searching for ways to do good and make positive change in the world. She might be a fictional character but she means so much to me. And that led me to following the actress that plays her, Chloe Bennet, on social media. A few months after I started watching the show, she did an interview where she talked very honestly about her mental health: “I suffer from anxiety, I’ve had depression… it’s hard.” She talked about having panic attacks. She talked about the importance of mental health. And she talked about having therapy: “I see a therapist on a regular basis and that has helped me so much.” Reading all of that meant a lot to me. Knowing that someone I admire has had a similar experience makes me feel less alone in that experience. 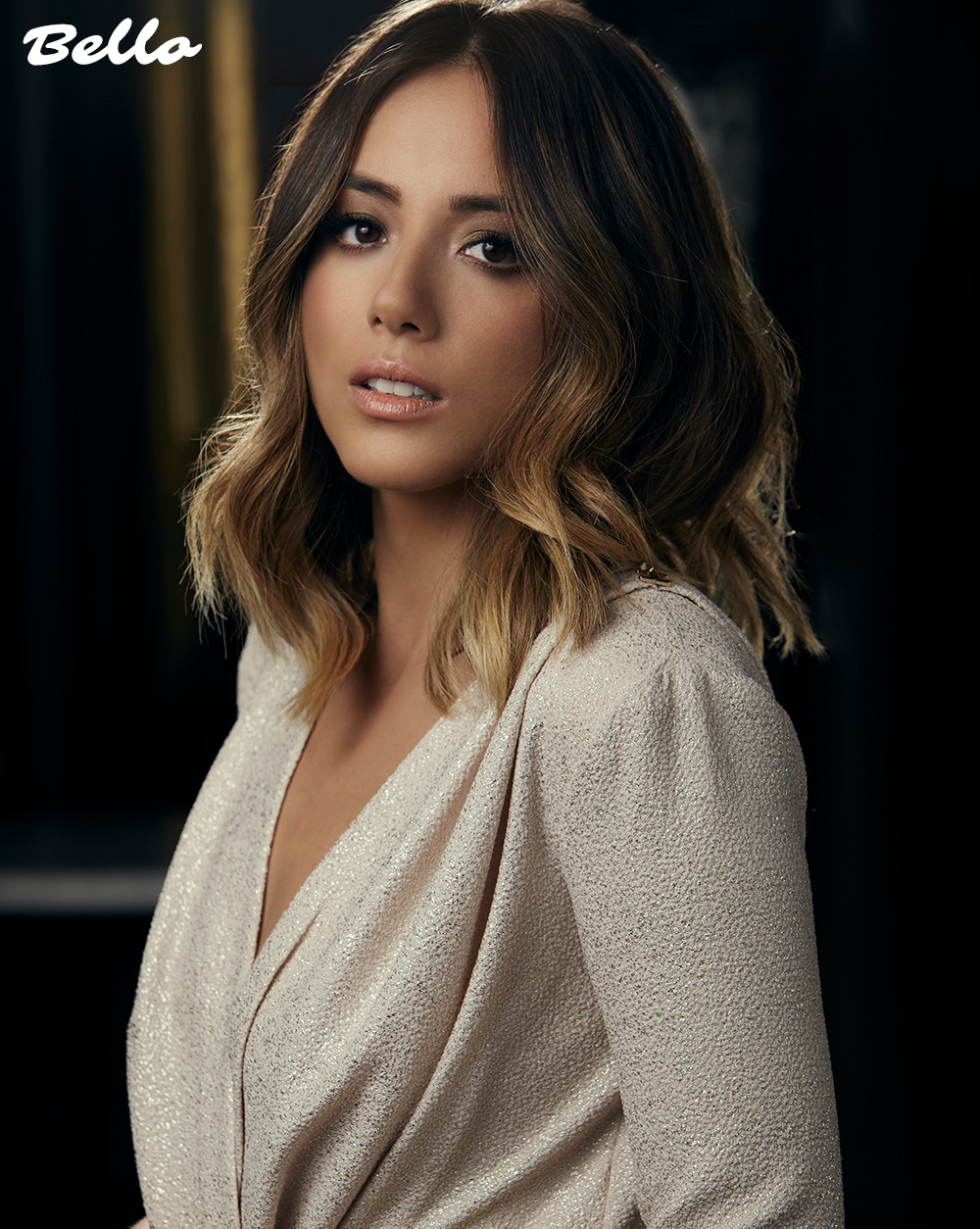 It goes without saying that I wish none of us had to deal with these challenges but hearing people talk about these experiences really helps me. It makes all of this less lonely, less isolating. And seeing strong, smart, insightful, compassionate people (real or fictional) deal with the same things I do, reminds me that I can be those things too, that my mental health problems don’t make me less of a person with less of a future. Seeing people succeeding in what they do, while living with these challenges makes me believe that that’s possible for me as well. Representation is a powerful thing.

← BEHIND THE VIDEO: ‘Clarity’
A Week in My Life (Reading Week) →

One Comment on “Seeing Yourself in the World Around You”