It’s time for a change.

I’ve been taking Phenelzine, also known as Nardil, for almost three years now and while it’s been a great help to me, I need to try something else. The last few months have been very difficult and to cut a long story short, I’ve been diagnosed (for the second time) with Clinical Depression. I’ve been finding it really hard to take my medication, knowing the effects it will have on me. It might sound strange but, when I take the Phenelzine, my mood lifts and feeling the way I do at the moment, I’m really struggling with that. I find it really hard to try and feel ‘okay’ when everything is ‘not okay’. To me, this makes complete sense but I can also recognise that I’m waiting to feel better while avoiding things that actually might help.

I think my problem with Phenelzine is how familiar I am with how it affects me. Having taken it for so long, I know exactly how it changes my mood. That used to be a good thing but now… Now, the ‘happiness’ it makes me feel just feels fake because I know it’s caused by the Phenelzine. I think it’s important to point out here that, objectively, I know that there is no difference between ‘real’ happiness and happiness caused by medication, and that I have always been a real advocate for taking medication (if you need it and it’s recommended). That belief hasn’t changed. But my familiarity with this medication is now making it difficult for me to take it so I need a new approach. It’s time to try a different one. Hopefully not knowing whether it’s the medication affecting my mood or the world around me will make it easier to take and therefore help myself feel better.

So I thought I’d do a little review of Phenelzine as a goodbye.

I started taking Phenelzine in the summer of 2014, after meeting my current psychiatrist. I’d taken various medications before (I’ll write about those at some point), all of which I’d had bad experiences with. So my Psychiatrist suggested Phenelzine, a drug not commonly used (in the UK at least) because of the dietary restrictions but one used when the other options haven’t worked. I’d never tried an MAOI (a monoamine oxidase inhibitor, one type of antidepressant) so I was optimistic that I would react differently than I had to SSRIs (selective serotonin reuptake inhibitors, another type of antidepressant). And I really did.

Almost straight away, I felt completely different. I had previously been almost unable to get out of bed, let alone do anything else, and suddenly I had more energy than I knew what to do with. My thoughts were like fireworks going off one after another after another after another. It’s the closest to mania I’ve ever experienced and my family were genuinely worried about me. I could barely sit still and I couldn’t shut up. I’m not kidding, I couldn’t stop talking and that was pretty embarrassing as I was just starting university. It was a bit scary but at the same time, I was absolutely ecstatic to be feeling so much better.

It took a bit of messing around with the dose (with my Psychiatrist’s supervision) but that did calm down. After a couple of months, I felt a bit more normal: I had more energy, I could concentrate and complete tasks, and my anxiety wasn’t as overwhelming as it had been. On a lower dose, I wasn’t so manic but I could still function a lot better than I could before. My almost perfect attendance in my first semester at uni is a testament to how much it helped.

Since then, with the exception of the last few months, it’s been a massive help to me. I’ve managed to complete my degree and graduate with a First, while commuting up and down to London. I mean, it was freaking exhausting but it would have been impossible without the Phenelzine. As I said, before I started taking it, I could barely get out of bed. The exhaustion that I experience with Depression is awful and I didn’t have the energy to walk my dog around the block. So Phenelzine was a godsend.

Side effects wise, there was only one that I struggled with (although I was initially a bit light headed and nauseous but that passed pretty quickly). My main battle was with the insomnia the Phenelzine caused. It’s has an alerting affect so it’s not that surprising that I had trouble sleeping. I struggled to get to sleep and when I finally did, I never slept more than four hours a night. It was exhausting. On multiple occasions, I fell asleep on the sofas at uni during my breaks and I’m pretty sure I fell asleep during a lesson once or twice: I have a very vivid memory of ‘blinking’ and finding the white board covered in writing…

This has been an ongoing difficulty. I ended up going back to the psychiatrist and left with a prescription for Quetiapine. I still have to take it every night to get to sleep and while I’m definitely grateful for that sleep, it also has it’s own downsides. It’s incredibly difficult to wake up; it feels like my eyes are glued shut, like I’m swimming through deep, dark water with no idea where the surface is and it can take hours to shake off the drowsiness. And it’s scary to feel like you will not sleep without it. I’m hopeful that, when I stop taking the Phenelzine, the insomnia will disappear and so I can stop taking the Quetiapine. That’s both exciting and scary. I haven’t slept unaided in almost three years; I’m going to have to learn how to do that again.

It’s going to take a little while to wean myself off Phenelzine and I have no idea how the new medication will affect me. So the next few weeks are going to be interesting. 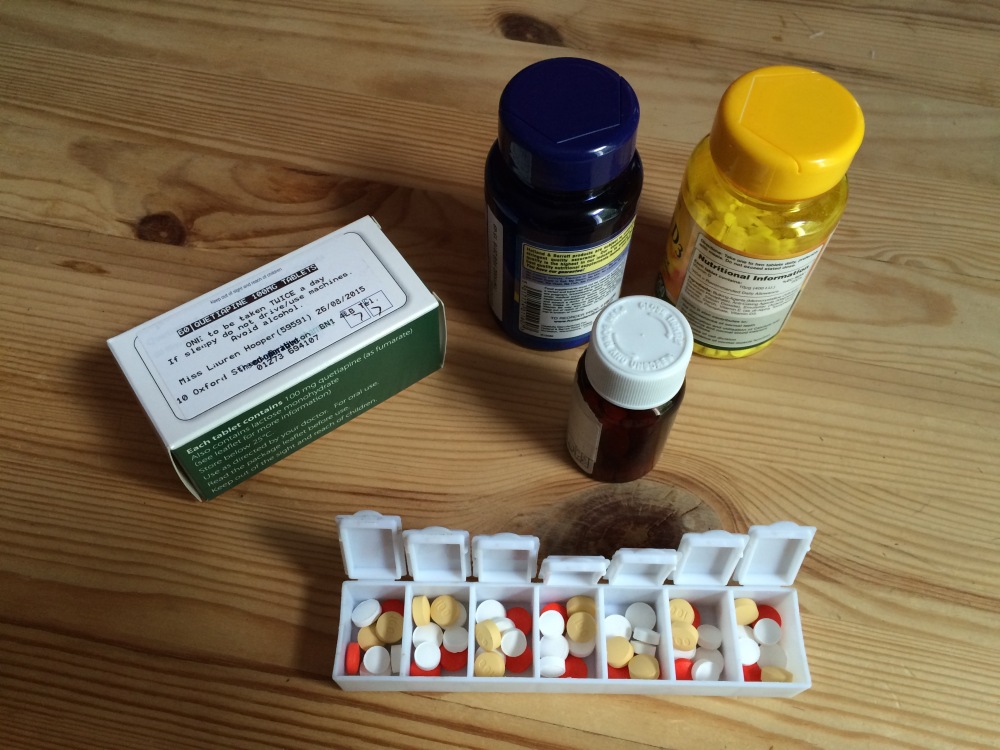 ← In Colour at Fabrica in Brighton
Behind The Scars →