Why Sara Bareilles Means So Much To Me

Since I’ve already posted this week (tips for talking about mental health), I wasn’t sure whether or not to post again today, whether I wanted to write something else as well as that. But last night, I went to the opening night of Waitress the Musical in London. The music was written by Sara Bareilles (who I LOVE) and the songs I’d heard from it (she released some of them as an album) were absolutely gorgeous. So I was very excited to go.

The show was amazing, hilarious and heartbreaking, and exactly what I needed. It’s not the story of the chosen one facing ridiculous obstacles; it’s about a woman who found herself very unhappy and how she tries to find happiness. Jenna, a baker at heart, discovers that she’s pregnant and starts making plans to run away but of course it isn’t that straight forward. I won’t give anything else away because if you can see it, you really should. Plus they make the theatre smell like a kitchen full of freshly baked pies. It was lovely.

It was a great evening but what made it all the more special was that Sara herself was there, introducing the show and then bidding the audience goodnight. I haven’t seen her since her two London shows in 2014 and I’ve really missed her. She’s funny and warm and genuine and she even sang us a little of her latest single. It was so nice to see her again.

I went to both London shows in 2014 and at the first, I left her a letter. I was really struggling with depression and social anxiety and I just wanted to thank her for all her music had done for me, how much it was helping me with all I was dealing with. And during the second show, she dedicated her song ‘Uncharted’ to me. It’s my favourite song of hers and it was such a special moment. That show was just a beacon of joy and having that through the difficult stuff that followed is something that means so much to me. I’m more grateful than I’ll ever be able to express.

I’ve been listening to Sara’s music since I was thirteen and I’m now twenty four. A lot has happened in that time: I got through sixth form, took a lonely year out, decided that I wanted to be a songwriter, worked through my degree, moving out of my childhood home, plus all my mental health stuff. I’ve had her music through all of that and it’s helped me process it and get through it.

When my depression is at its worst, I can’t listen to music. I find it hard to put into words because it’s so deeply rooted in feeling but it’s suffocating and miserable and painful. It takes me a long time to recover from that state and coming out of it leaves me feeling fragile and raw. It’s like I’m made of glass and anything too loud will shatter me. It causes me a lot of distress. I can’t listen to music straight away – it’s just too much, in terms of both emotion and sensory information – but I can listen to Sara Bareilles songs. They’re gentle and genuine and they strengthen my soul. I’ve had her music in the best of it all and the worst of it all and that means the world to me.

I also really connected to and loved her book, Sounds Like Me. I read it in one sitting and just fell in love with this new form of her writing. Again, her writing was so gentle and I loved getting even more of the stories behind the songs. If you want to understand me, read the chapter ‘Red.’ Reading the book, I felt connected to her and that was very strengthening. 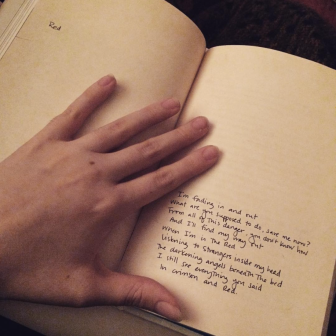 She’s also one of the reasons I got into songwriting. Her lyrics are beautiful and honest and heartbreaking and I learn something from every song. If I could write songs half as well as her, I’d be ecstatically happy. And when it comes to pursuing music as a career, her choices as a creative have really inspired me: to be authentically me, to try out everything I can, to be brave, to stick to who I want to be and to what I want to create. When you’ve got people trying to mould you or redirect you at every turn, that’s magic.

Sara Bareilles and her music will always be so special to me. Hopefully one day I’ll be able to thank her.