A Lot Has Been Happening

My sincerest apologies for not posting in so long. Life has been hectic and difficult and busy and strange. It’s been really difficult to write, to write anything at all (apart from my diary, which I’ll explain in a minute) so I just had to give myself a break from posting here and hope that you guys would understand. It’s just been too much. I don’t think I’m ‘back,’ but hopefully there won’t be such big gaps between posts and maybe we’ll even get back to weekly posts at some point.

So here’s what’s been going on, so you’re all up to date…

First things first, I turned twenty five. I’m not gonna lie, I was having a bit of a quarter century crisis. There’s a definite milestone about turning eighteen and then twenty one but turning twenty five felt (and still feels) like a big step into adulthood and I’m finding that very scary. I still feel stuck at seventeen: young and naïve and vulnerable. So I’m struggling with it a bit.

The day itself was a struggle. My anxiety is through the roof (which I’ll talk about it in a minute) but the compulsive writing of my diary (something I’ve struggled with on and off for a long time) has become really extreme, to the point where I’ve been finding it difficult to do anything else. So while I had some really lovely moments on my birthday (twenty five yellow roses from my Mum, some really lovely presents, and dinner with my family), all I could think about was how I should be writing, how I was wasting time that should be spent catching up with my diary. It was very upsetting because there were so many things I’d rather be doing than writing my diary or stressing about it. 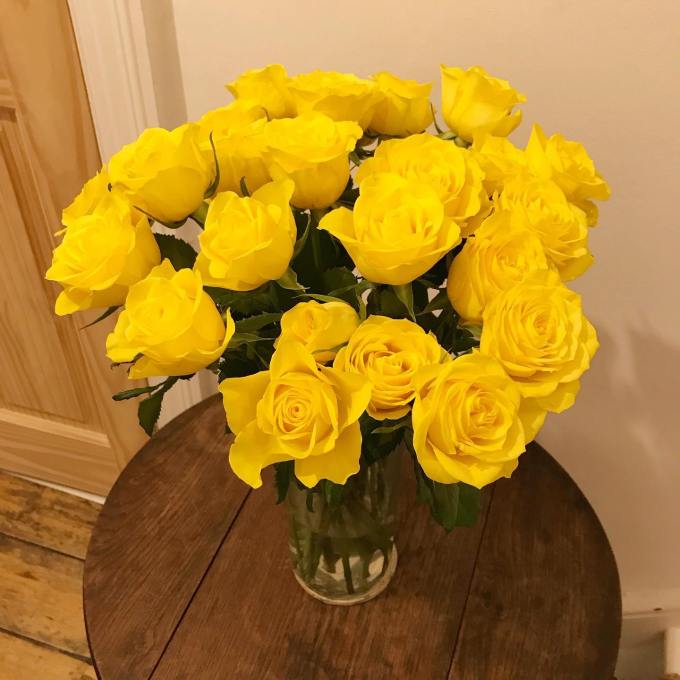 I’ve had a habit of many years to think on my birthday ‘this year will be better’ or ‘this year I’ll be happier.’ But I’m done with that. I’m not going to waste time comparing the ups and downs of the last several years but I never felt as if those statements came true. I always felt as if I was struggling just as much, if not more so, than the year before. So, as I said, I’m done with that. I have no expectations of this year. At the moment I’m too anxious to think beyond the next week or so, so I don’t even really feel capable or doing it anyway. It’s all too overwhelming.

Anyway, I’m twenty five. I’m not sure what that means yet. So I guess we’ll see.

Unsurprisingly, it’s in songwriting. I’m doing it part time so I only have half the workload as a traditional Masters student and that has turned out to be absolutely the right choice. At the time, my main reason was because it would allow me to really take in what I was learning and apply it to my songwriting, rather than just absorbing it only to regurgitate it for an exam or coursework piece. And that’s still true but it’s turned out to be completely necessary for my mental health. One day of classes (plus the commuting) requires at least two days of recovery and my mental health, particularly my anxiety, has made it very, very difficult to complete the work required and so having only half the workload and the extra time to do it in has been a blessing.

I’m just about to start week three and so far, I’m really, really enjoying the classes. This first module is about Creative Process, the theory of it and the exploration of our own, and the content we’re covering and discussing is just fascinating. I actually wish the two hour lecture was longer. For example, we just learned about autoethnography (exploring your personal experience and how it connects to wider cultures and experiences and so on) and it’s really hard not to stop my current research and just dive face first into that.

But anyway, the practical songwriting class has been a bit up and down for me personally. My writing massively depends on my mental health and so when I’m really anxious, I find it impossible to write. During the first week, I barely managed to turn in a song but this week, I’ve felt more able to write. I don’t want to comment on the anxiety, on whether it’s passed or not because that just makes my anxiety worse. If it comes back after making a statement like that, it will just be even more of a struggle. So regardless of the anxiety, I’ve felt more able to write and am currently in the middle of my second song. I love writing again and I love having writing briefs to explore and experiment with. So, so far (without the stress of assessment), I’m really enjoying it.

Also, I have a really small group and so we’re getting to know each other pretty quickly, which is really nice. It’s so inspiring to hear the developing music of others again, as well as getting feedback on your own fresh work. I’ve really missed that.

Yes, I’m releasing my first EP. My God, it’s been an emotional complicated process. I’ve gone through so much since I decided I wanted to release an EP last year and I honestly don’t even recognise myself. I’ll talk more about that in a minute but first, let me introduce you to the project…

And here is my big announcement!⁣ ⁣ Over the next nine months, I will be releasing an EP of five songs. I’ve been waiting to release new music for so long and I’m so emotional about you guys finally hearing these songs. The EP is called ‘Honest’, and I’ve been working with some fantastic people for a long time on these songs so I’m really excited to finally let them find their place in the world. ⁣ ⁣ Keep an eye out because I’ll be sharing more details of the first track next week.⁣ ⁣ ***⁣ ⁣ This EP is essentially a short story, a short story about my experiences with mental health up until now. It’s been difficult and excruciating and frustrating and lonely, but it started getting better when I started writing about it and talking about it, even if it just meant I wasn’t keeping it tightly sealed inside myself. I’ve worked hard to get myself into a better place but I don’t know if the ground will ever truly settle, if I’ll dig up all the landmines. We all have our struggles, our fears, our ghosts but maybe being honest is the first step, whoever it may be with.

The first single from the Honest EP will be released on the 18th October. SWIPE TO SEE THE TITLE 😉

If you want to get the information as soon as it’s released, you can follow my social medias, which are all listed on the main page of the blog.

I don’t think I could untangle my feelings about the songs if I had thousands of words to do so but I think a big part of that is all the anxiety I’ve been struggling with. Living with extreme anxiety, everything feels like the wrong choice, everything makes me feel sick and useless and miserable. It’s really hard to be excited about releasing something like this, about anything, when I feel like that. So it’s a struggle. I’m trying to be positive and enthusiastic because I have been those things but I’m finding it hard right now. But a lot of hard work and love went into these songs and this project and I am really proud of that.

I’M LIVING IN A MELTDOWN

I was going to write a whole post about this but then all this time passed and it just made sense to include it here.

Just over a month ago, I had the worst meltdown I’ve ever had. In the middle of Victoria train station (for those of you not familiar, one of the biggest train stations in the UK). A big plan had been changed and the new one was vague and I was alone and anxious already. I completely fell apart: sobbing and shaking and hyperventilating. There was nowhere quiet to go so I curled up in a chair, desperate not to be seen, desperate to disappear. I couldn’t think. I didn’t know what to do. And I couldn’t get hold of anyone on the phone so I had no one to give me advice or help me calm down. Eventually I did manage to get hold of my Mum and she had to literally walk me step by step onto a train home, plans abandoned.

Usually it takes me a couple of days to recover from a meltdown, sometimes a week if it was a really bad one. I feel anxious and fragile and raw and completely overwhelmed. But this time, those feelings didn’t go away. Over the last month, I’ve been constantly filled with extreme anxiety, so much so that I’ve been almost unable to function. I’ve felt so fragile and so easily overwhelmed that any new stress has triggered a meltdown, resulting in multiple meltdowns a day: screaming and crying and throwing things. It’s been absolutely hideous. It’s like I’m permanently living in a meltdown, with waves of anxiety and hypersensitivity and then the waves of shouting and crying. I don’t know if that makes sense; I’m still looking for the perfect metaphor, at least for my experience.

So all of this has affected every other part of my life. Sometimes I can push through it and manage what I need to manage and sometimes – a lot of the time right now – I can’t. I’m trying. I’m doing my best.

So now you’re up to date. To a degree. Some of this stuff is really hard to explain, as I’m sure you know if you’ve experienced it or anything like it. There’s a lot going on, a lot of stressful stuff in particular, so life isn’t exactly a cakewalk right now. But as I said, I’m trying.

I hope you’re all well, or at least coping as well as you can. Hopefully I’ll post again soon.